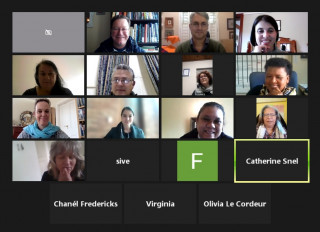 Heidi Boise is a heritage consultant, specialized in architectural built environment. She is a past heritage official at Heritage Western Cape and in 2019, established Patrimoine Concepts, a multidisciplinary built environment consultancy. Heidi has 20 years of combined experience that includes 12 years of architectural, 7 years academia at Cape Peninsular University of Technology and 4 years heritage management experience at Heritage Western Cape. She is committed to develop and build everlasting relationships with various recognized clients and institutions both in public and private sector.

Moses Ge Mthethwa was born in Richards Bay in 1982, matriculated in 2003 and moved to Durban in 2004. He studied a National Diploma in Public Management at Mangosuthu University of Technology which he obtained in 2008. In 2018 he obtained his Bachelors Degree in Public Management at Cape Peninsula University of Technology and currently studying for a Master's Degree at UNISA. He started working at Mangosuthu University of Technology in 2007 in the Marketing Department as a Marketing assistant before moving to Robben Island Museum in 2013 to work as a Project Administrator. He currently works for the Western Cape Department of Cultural Affairs and Sport as manager of CP Nel Museum.

Adam de Beer: I hold a PhD in Film Studies on the topic of adult television animation and a MEd in Higher Education focussing on Curriculum Design. I am presently studying a MSocSci in Heritage and Museum Studies focussing on Tangible Heritage Conservation. I have lectured in Higher Education on a variety of topics, including films and film making, media literacy and aesthetics, semiotics, communication, film and television scriptwriting, video production techniques, animation history and theory, and research and academic literacy skills. My research focusses on lace making as craft, South African lace and lace history, and the conservation of lace and textiles. (From Linkedin)

Elzette de Beer is an art historian and administrator based in Franschhoek, where she works as curator at the La Motte Museum which is host to a prominent Pierneef art collection. Prior to this, she worked in Joburg as gallerist for an art-based activity and collaborative art facility, eventually as co-director responsible for operations and programmes spanning the galleries, bookstores, and collective projects. She holds an MA in Art History from the North-West University where she began her career as assistant and then manager of the North-West University Gallery. Other projects include being fellow-coordinator for a regional arts festival, involvement in an art-based non-profit organisation and recently, setting up the Christo Coetzee Art Museum in Tulbagh. Her current professional focus is introducing new audiences to South African art and history and making the museum accessible to visitors from all walks of life.

By accepting you will be accessing a service provided by a third-party external to https://samuseums.co.za/